It's the second week of November, which means Blue Angels Homecoming Show!!!!

My annual trip to Pensacola for the Blue Angels Homecoming show. It was on Friday and Saturday, as usual, but no Friday night show this year. The Saturday show was cloudy, although with a high ceiling until the last 15 minutes or so, but not good light. I didn't even bother with pictures on Saturday, and the Blue Angels had to switch to their low show for the last 8 or 10 minutes.

On Friday, it was sunny, but with the first couple of passes of the Navy's F-35C I was worried about not getting any good vapor. 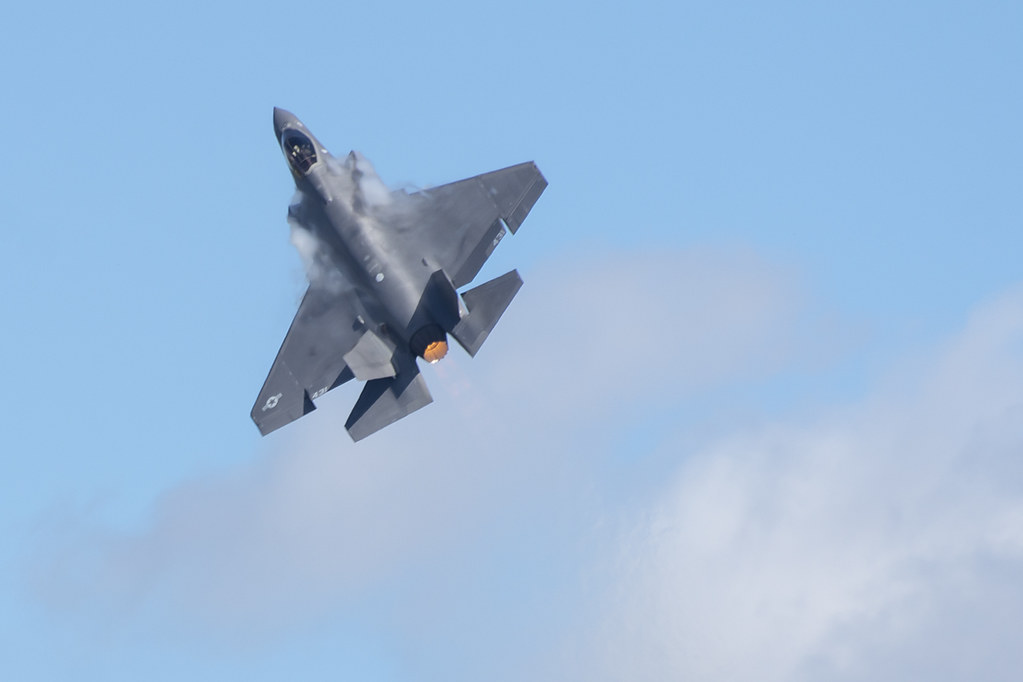 Got a lucky poof in the minimum-radius turn, though! 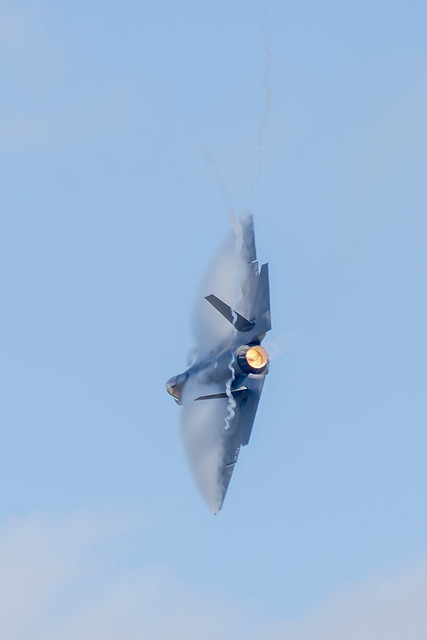 He did a touch-and-go to demonstrate both the high descent rate used for carrier landings, and the immediate kick to full power on touchdown in the event of a missed wire. 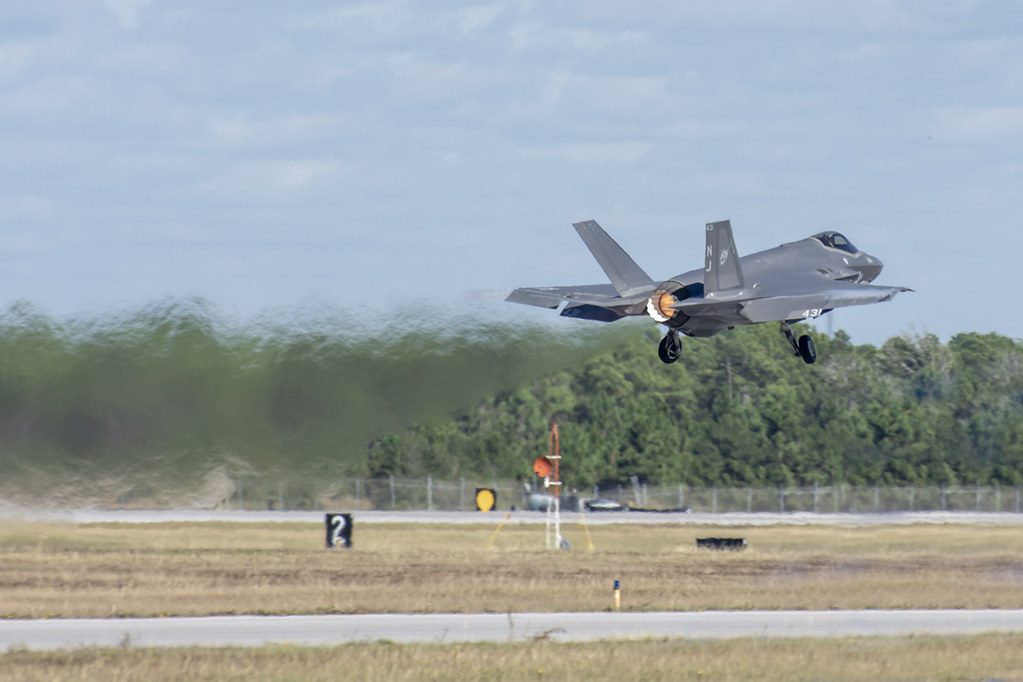 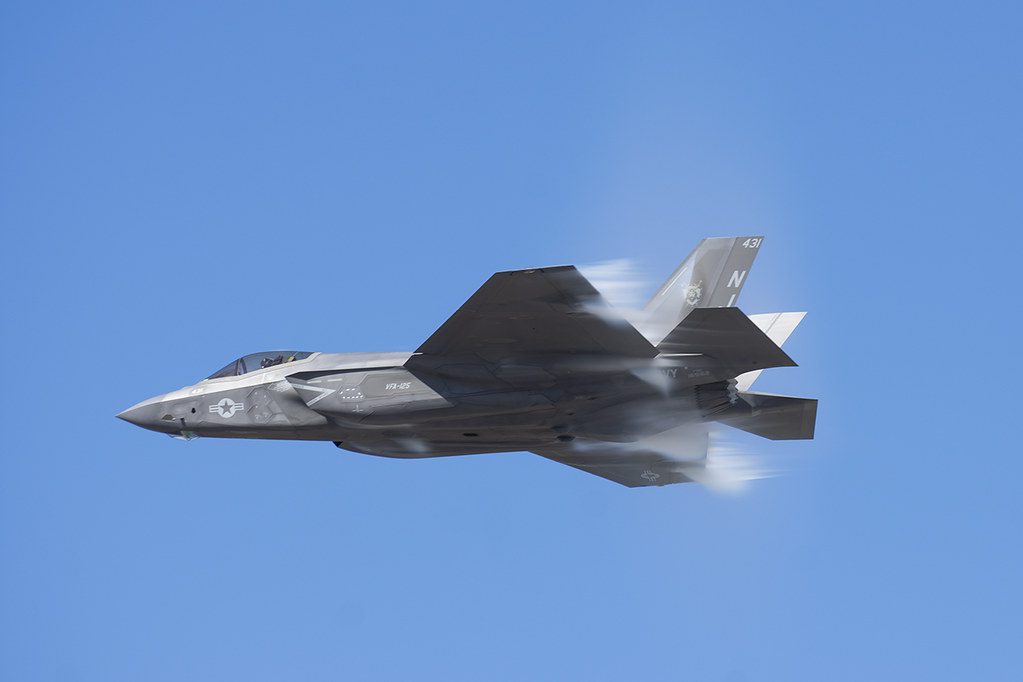 A second F-35C joined, and they formed up with an F4U Corsair for the Tailhook Legacy Flight. 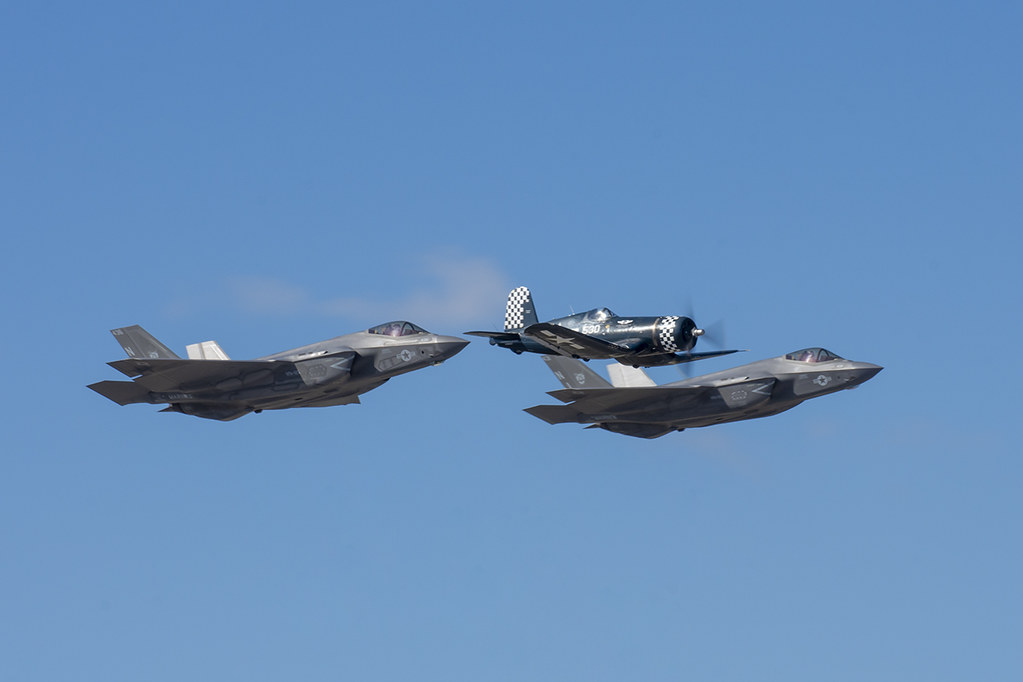 There is a Russian airplane called the YAK-55, built for international unlimited aerobatic competition, an aircraft conceptually similar to the Extra 300 and 330 that US air show fans are familiar with. These guys had the idea of joining two of them together, just because, and then suspending a jet engine under the center wing section, just because, and came up with this, which they call the YAK-110. That's not an official YAK designation, of course; it's simply 55 plus 55... This is the only three-engine aircraft in the world certified for unlimited aerobatics. the pilot goes through some weird loads because of not being centered in the airframe! 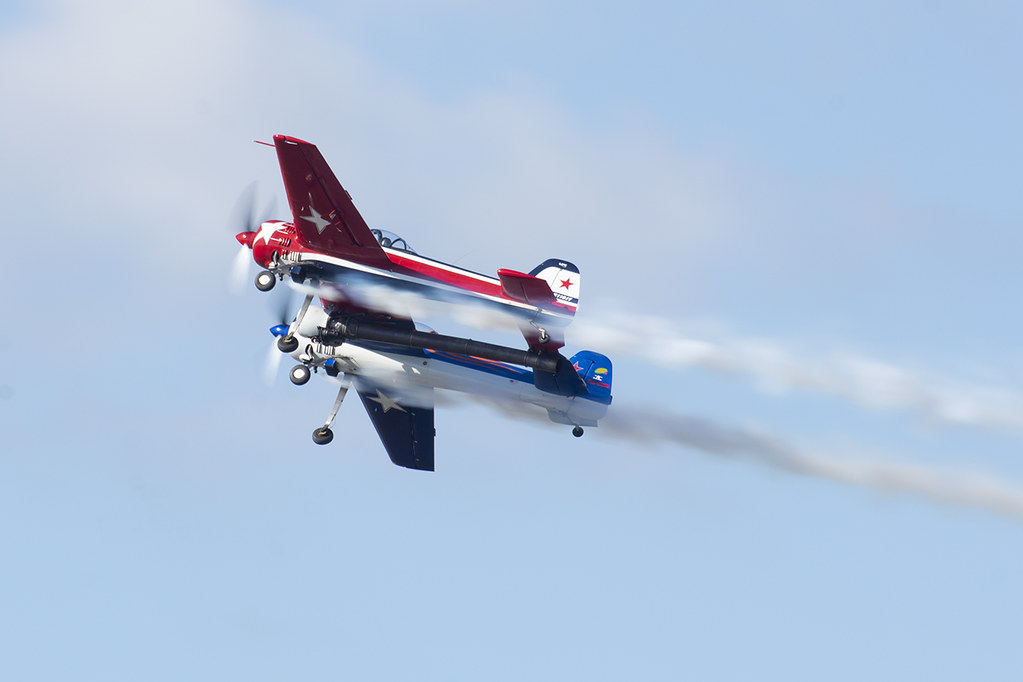 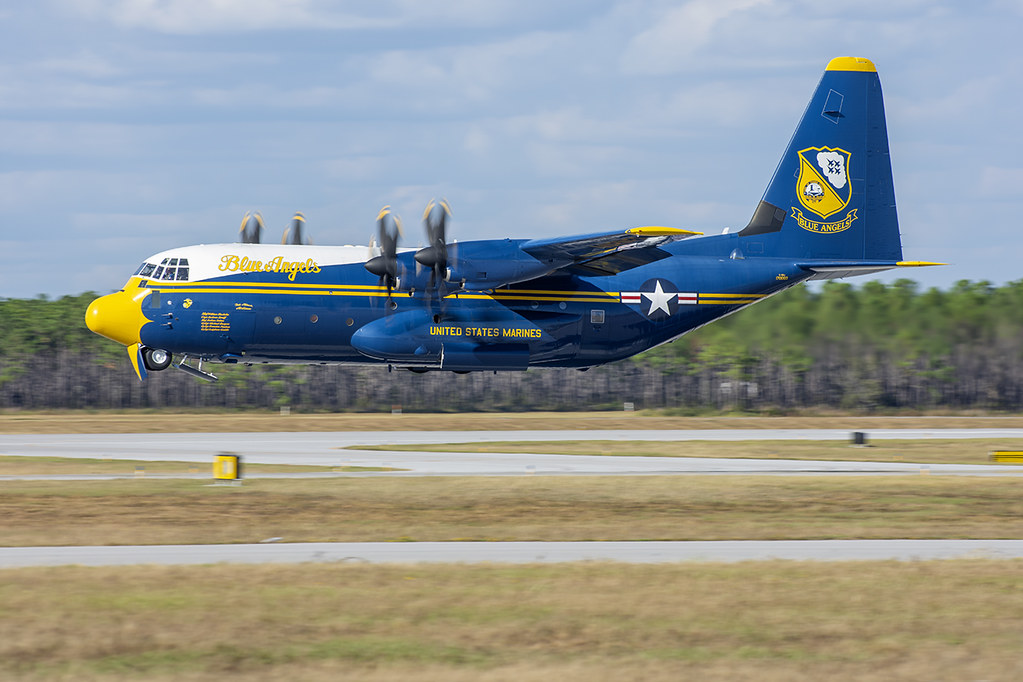 ...pulling up to a 45-degree climb, leveling off at about 3,000 feet. There is in-cockpit video on Youtube showing the crew floating weightlessly as they level out at the top of the climb. 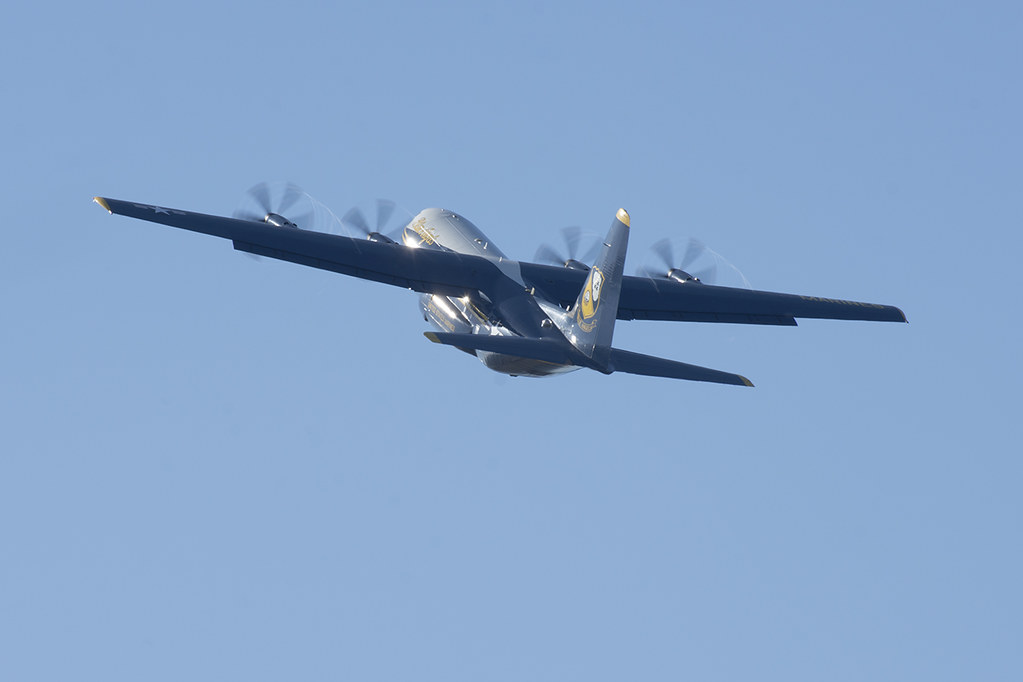 They made a photo pass, so I, um... took a couple photos! 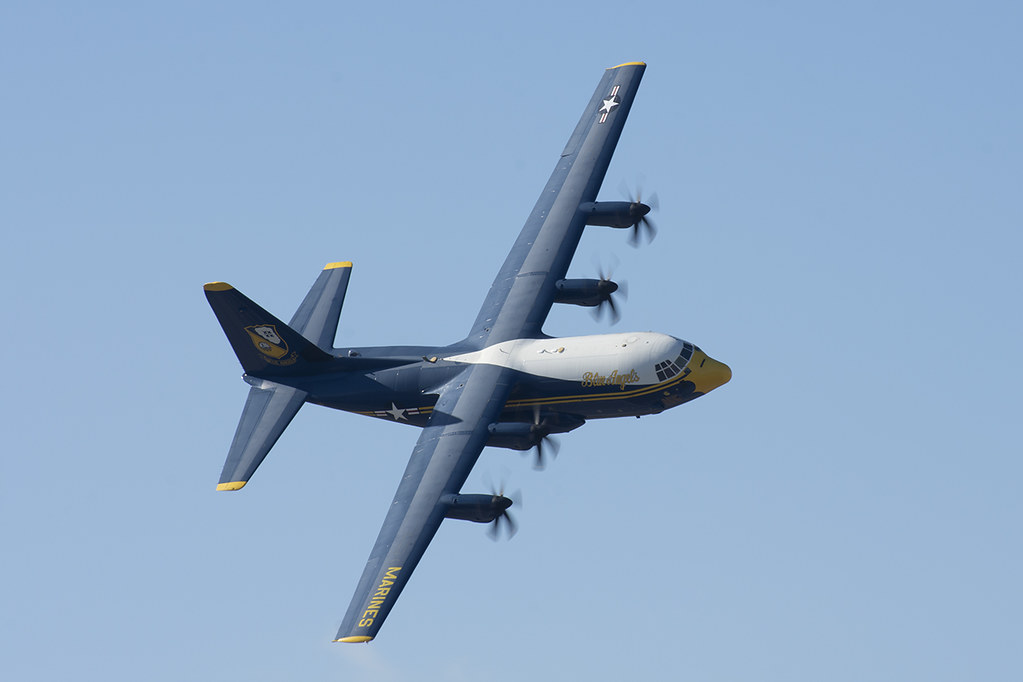 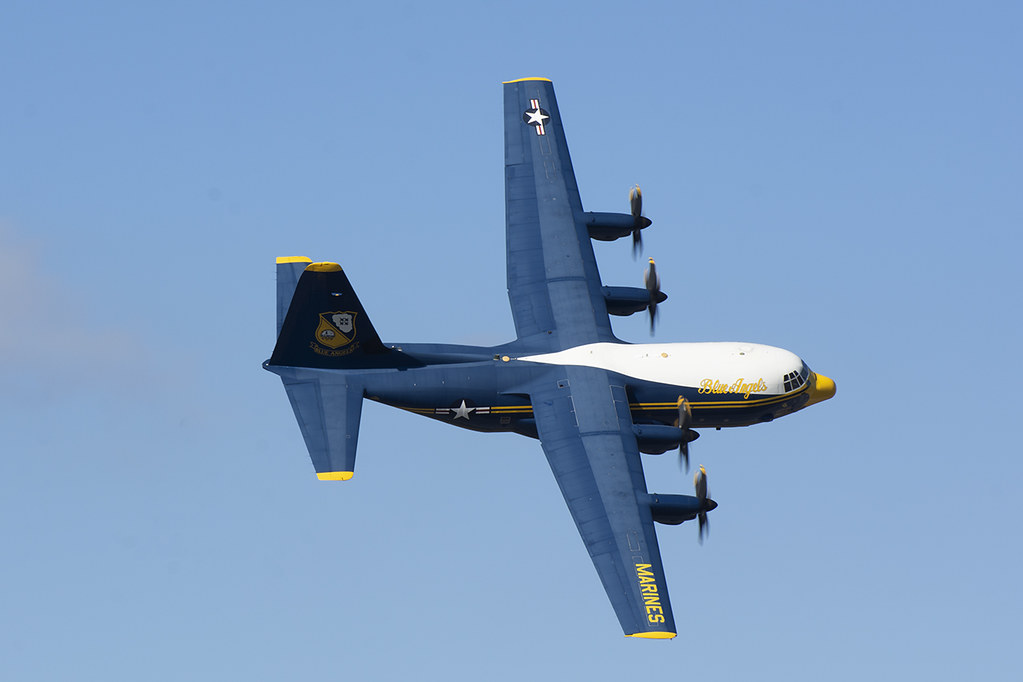 They make a steep descent to simulate a landing area near mountains. 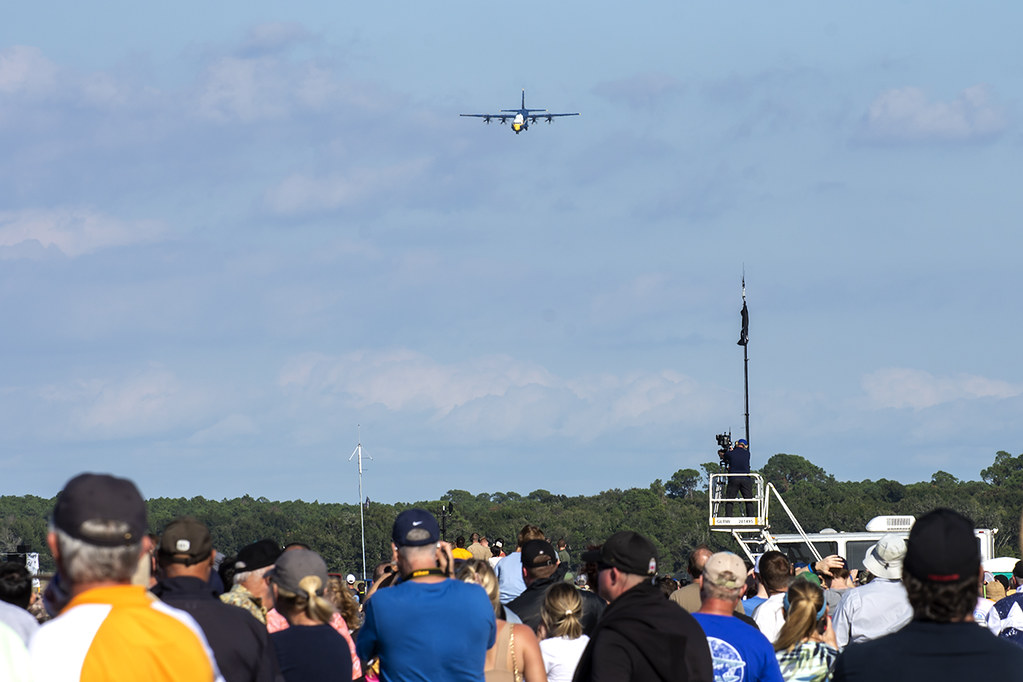 Continuing because of the 20-image-per-post limit.

And the Blues themselves! 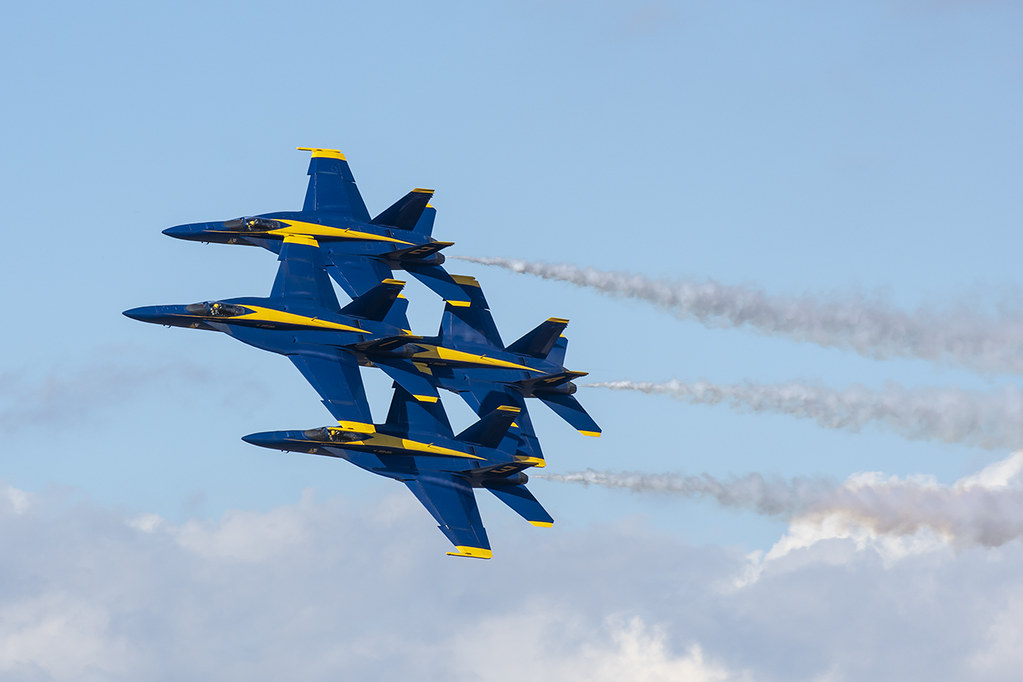 Diamond dirty loop, gear and hooks extended to show speed control and handling characteristics. They are the only jet team in the world that does this. 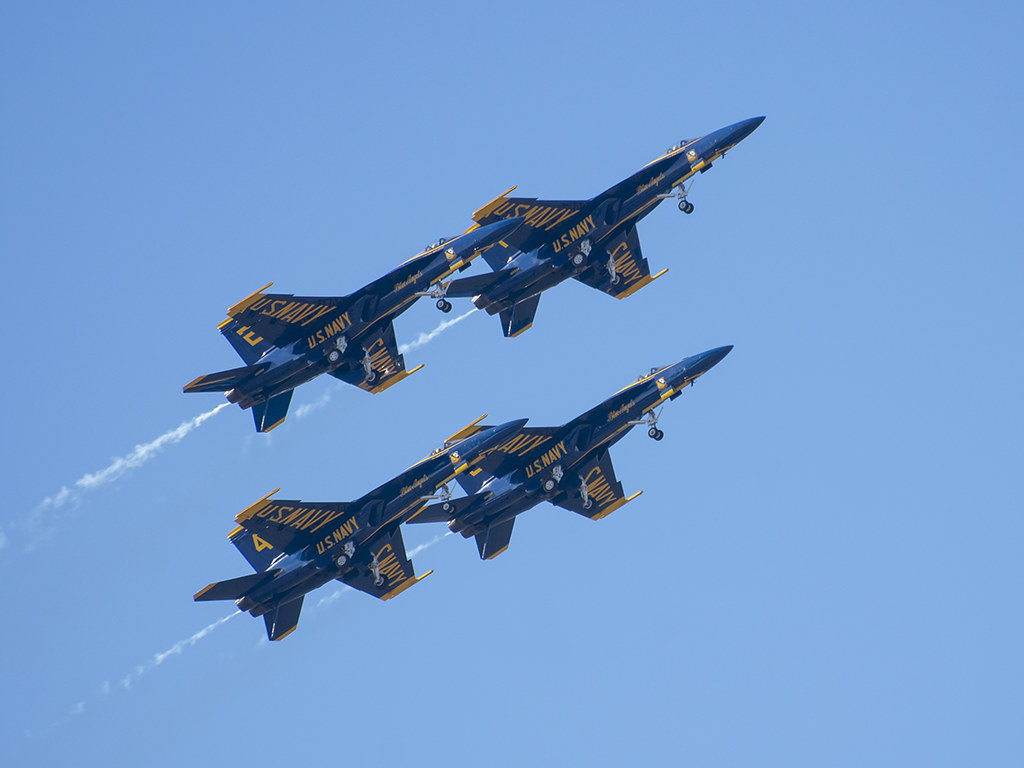 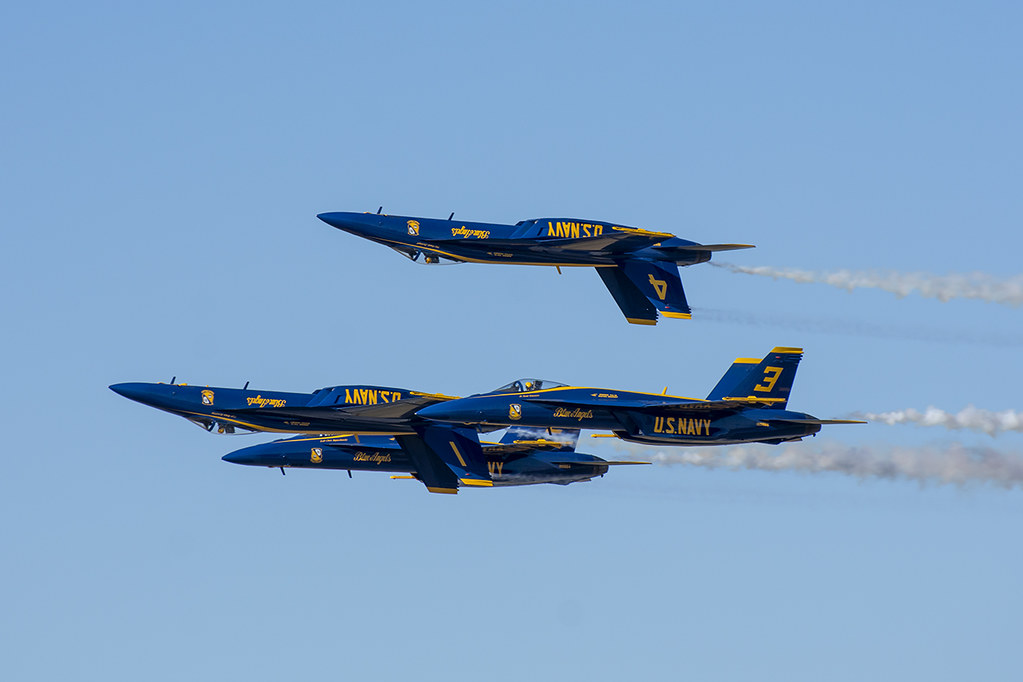 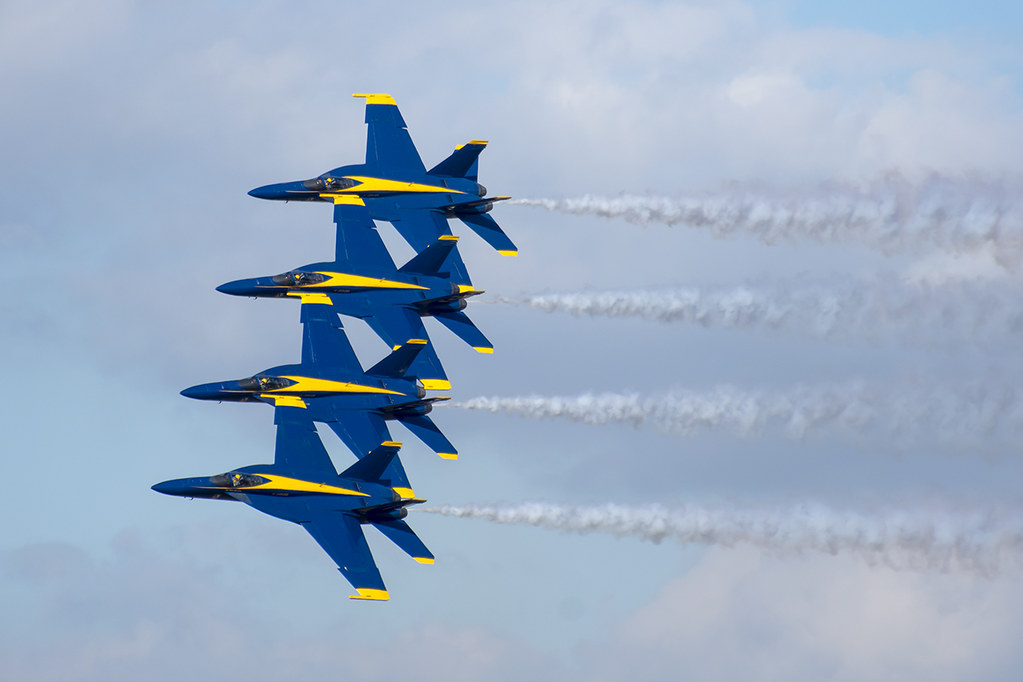 I absolutely love the sneak passes!!!! I also enjoy seeing in my pictures how many people have absolutely no clue! 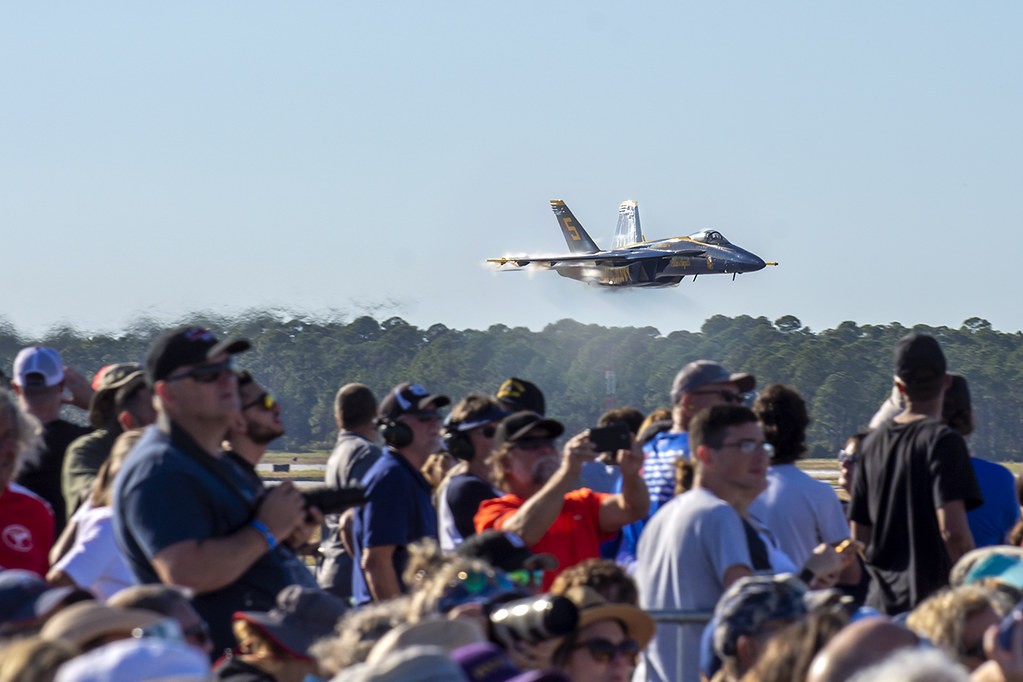 I got a print-and-hang for sure as he passed directly ahead! 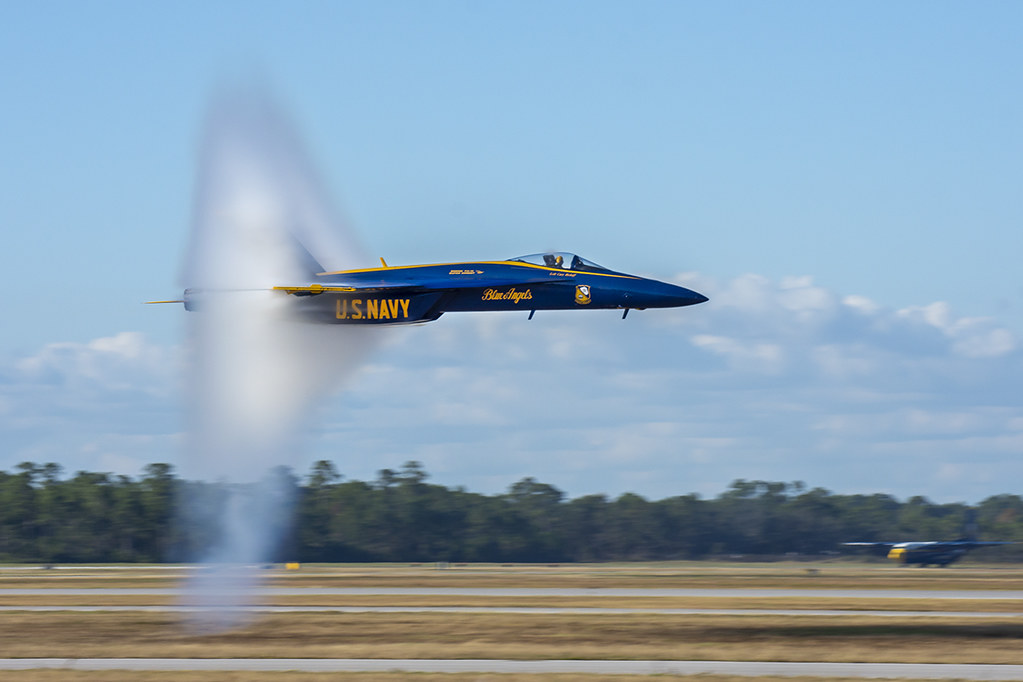 And since one surprise is never enough, #6 follows immediately from behind the crowd, into a hard pull to nearly vertical. 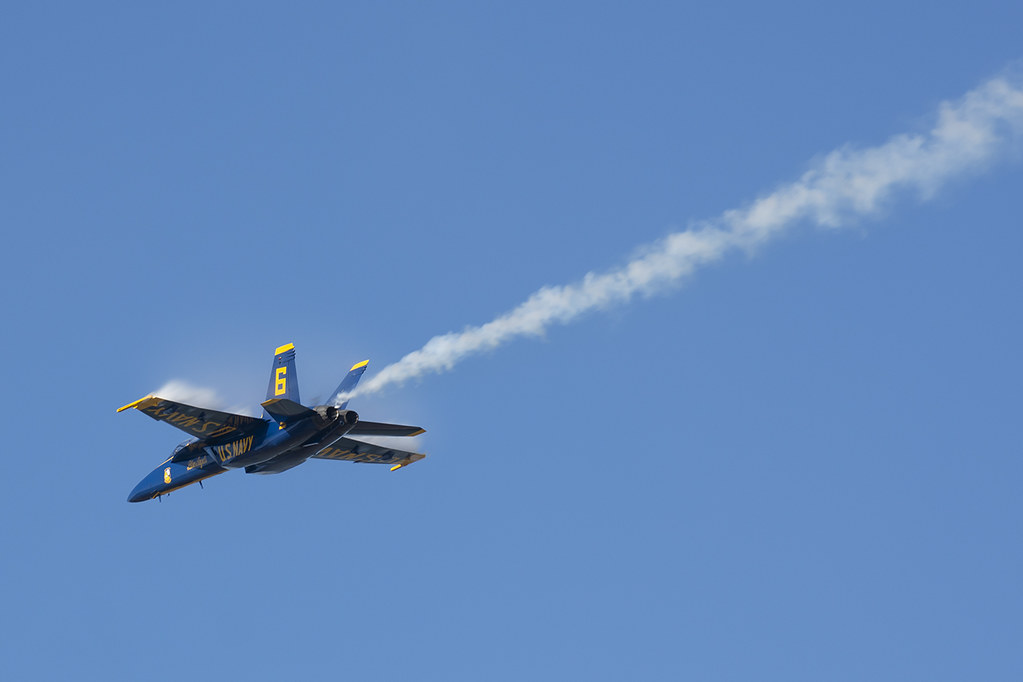 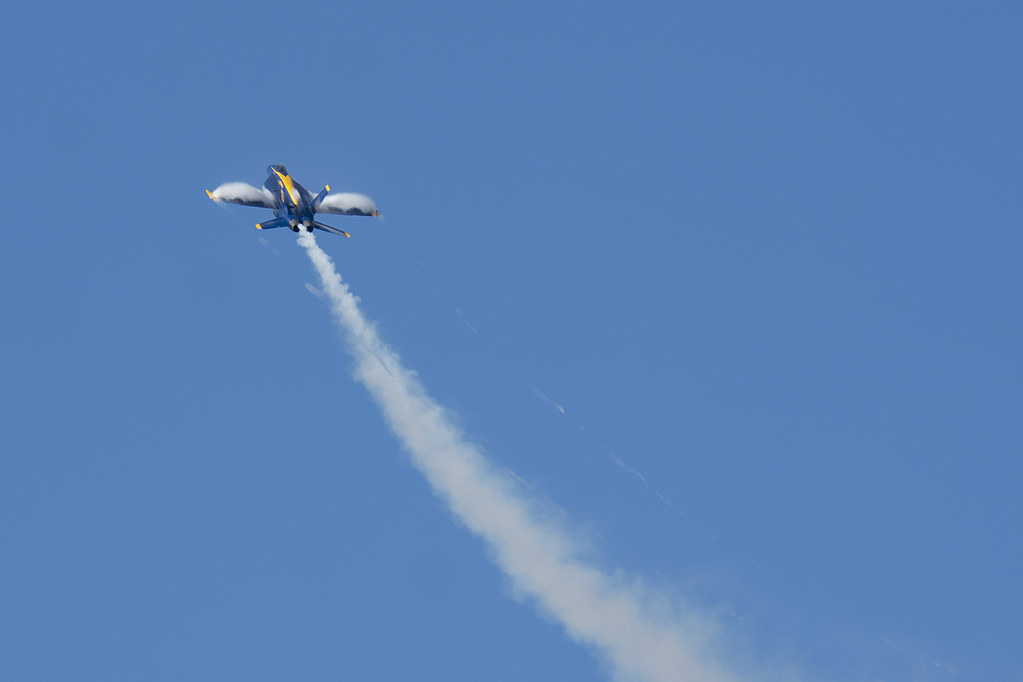 The diamond approaches from directly ahead of the crowd, does a looping turn that ends with them entering from the right end of the line... 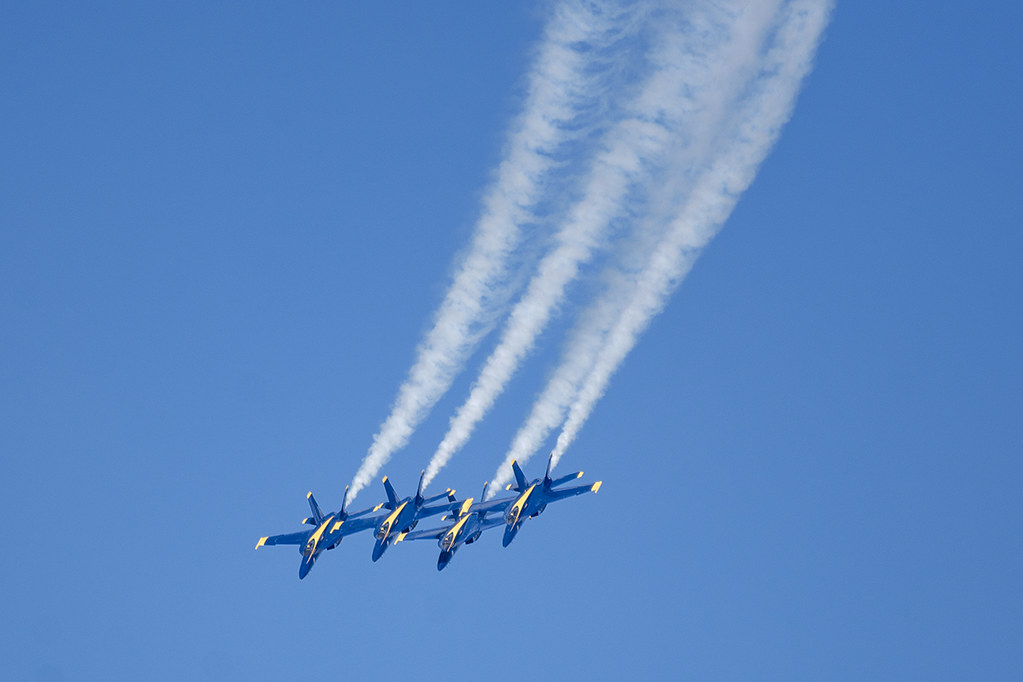 .. and as they pass show center, they break hard, with 1, 2, and 3 pulling hard away from the formation, and 4 continuing straight and flat, but inverted. 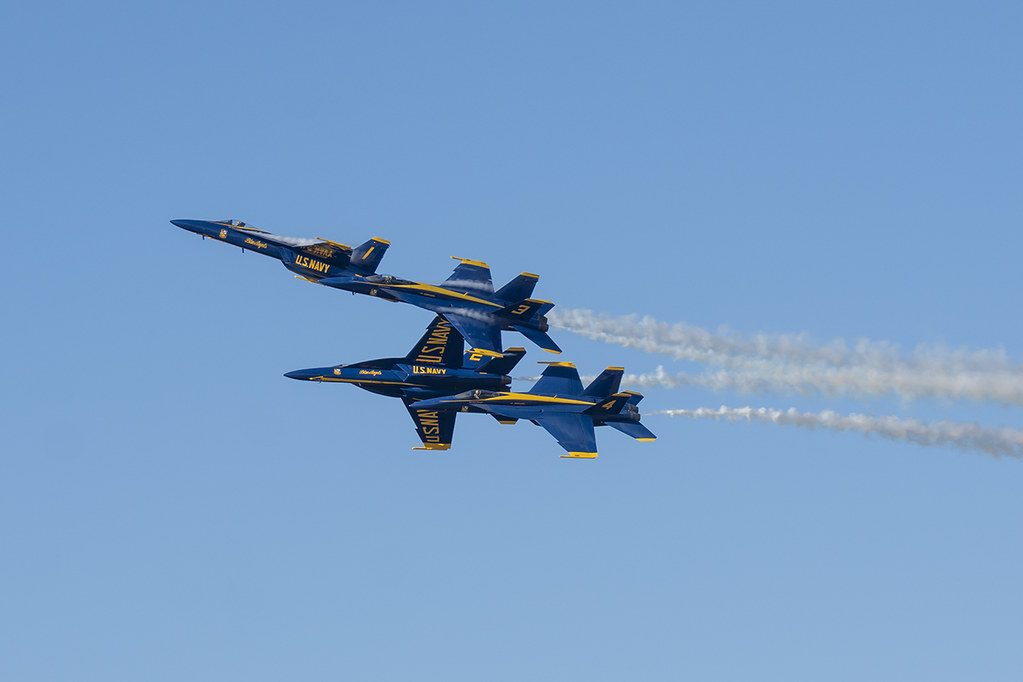 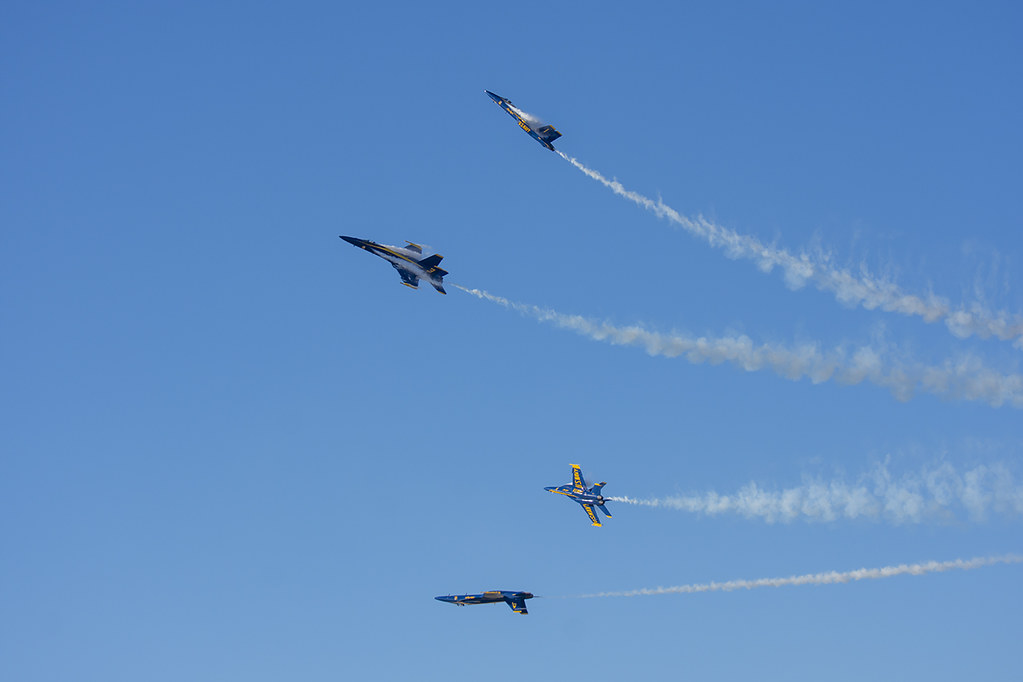 There are a couple of 6-ship maneuvers, including the delta roll. 5 and 6 are quite busy flying a spiral around the leader in order to hold formation. 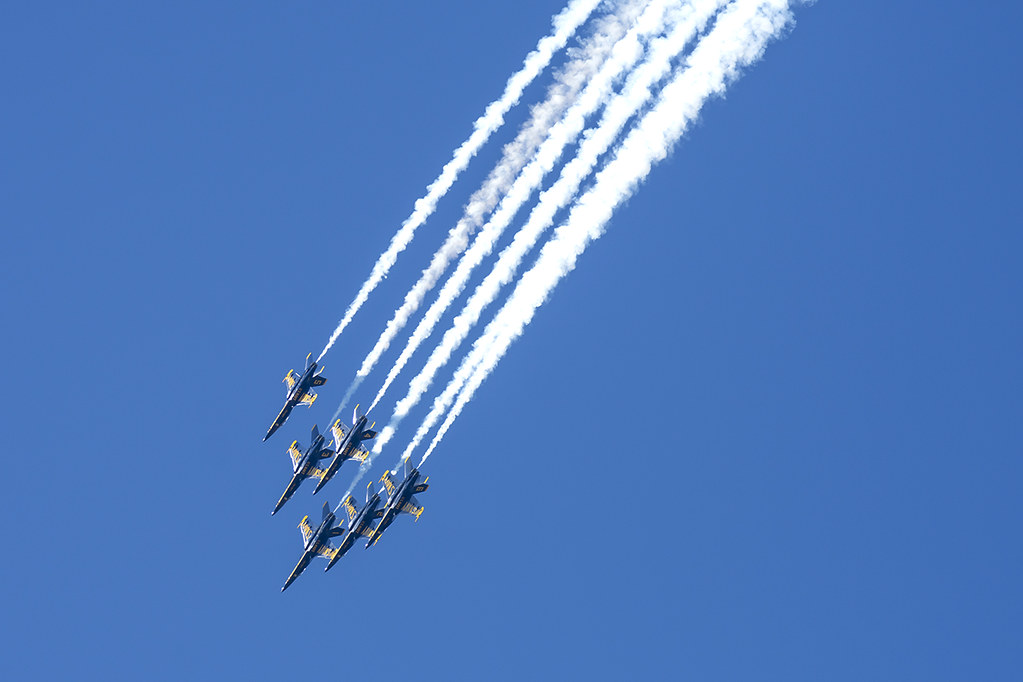 Then the delta comes in from the right, starts a loop, and on the down vertical of the loop they break in the bomb-burst display. 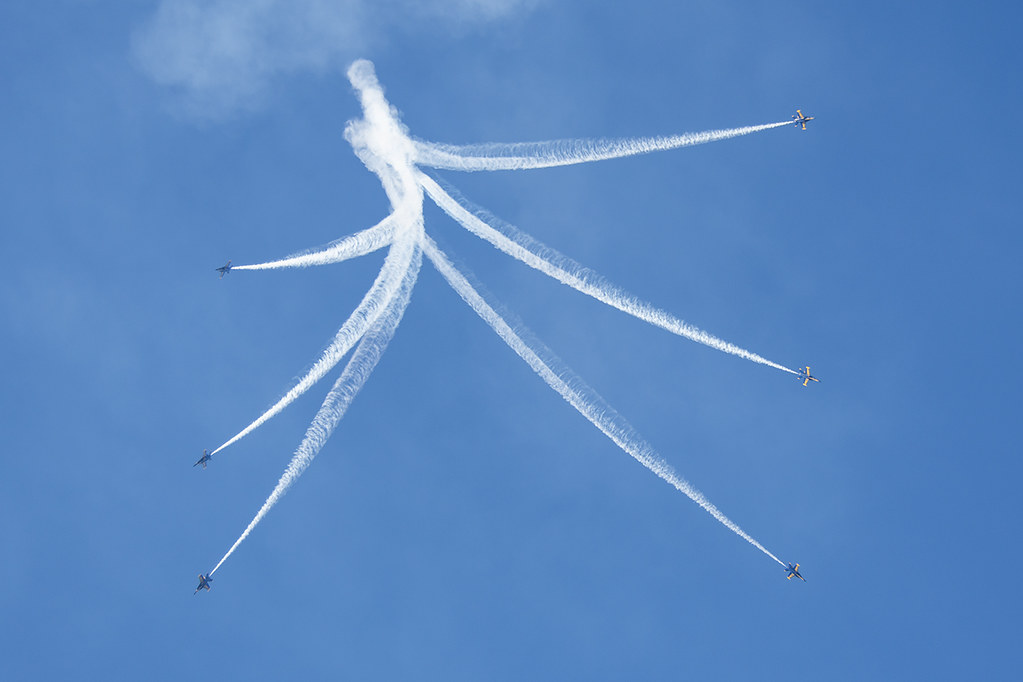 Each aircraft reaches level flight, runs out about 3 miles out and does a half Cuban-8 to head back to show center, where they pass each other simultaneously, from six different directions, each one at 450 miles per hour. 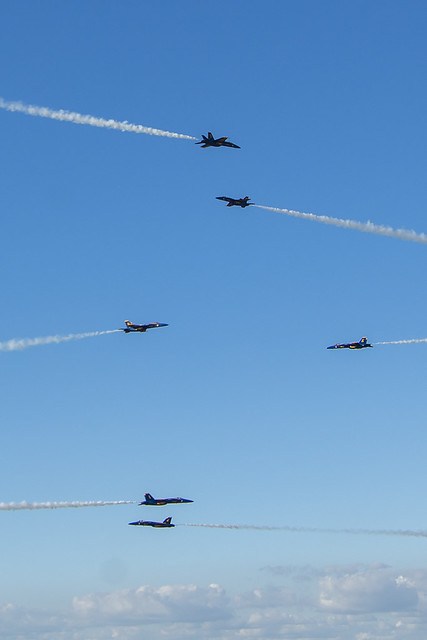 Their final maneuver is from directly ahead, all 6 aircraft in the delta, and they, as the narrator describes it, "separate in dramatic fashion." 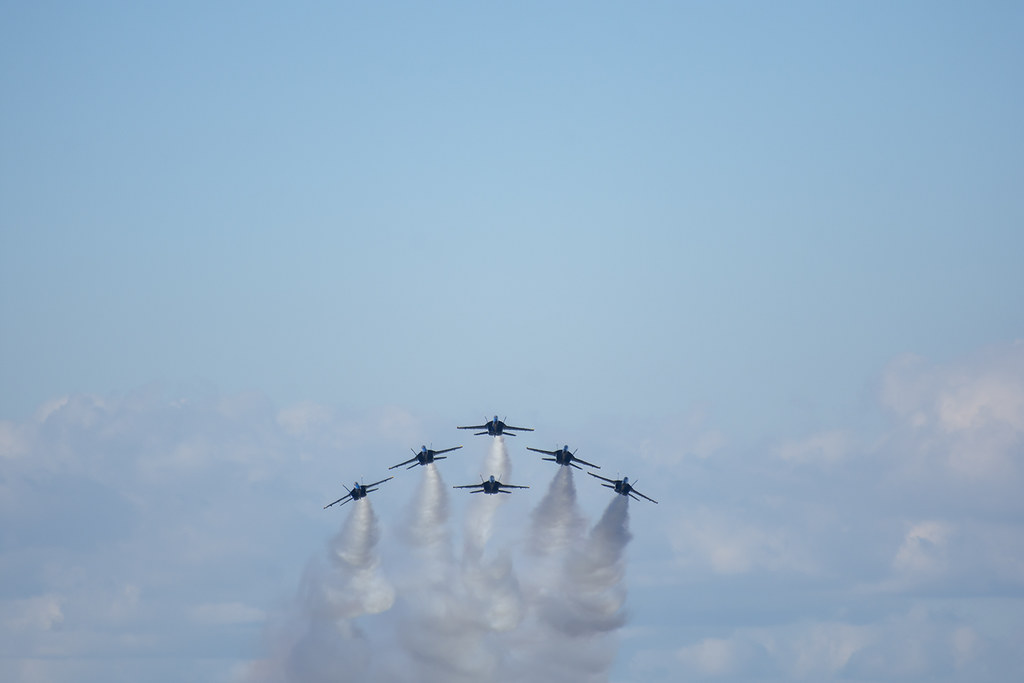 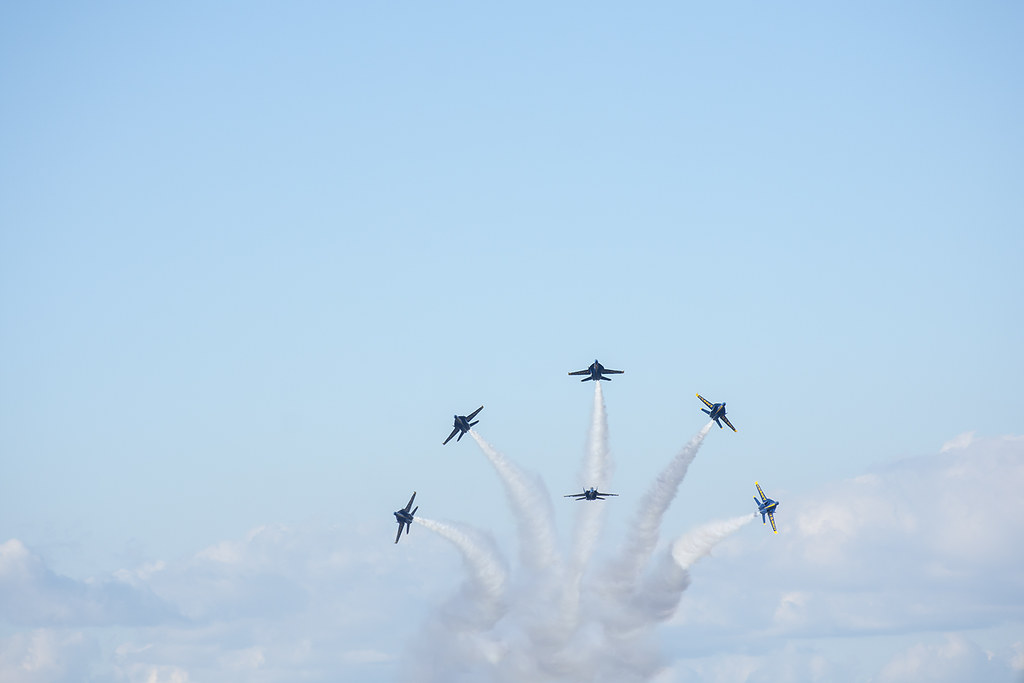 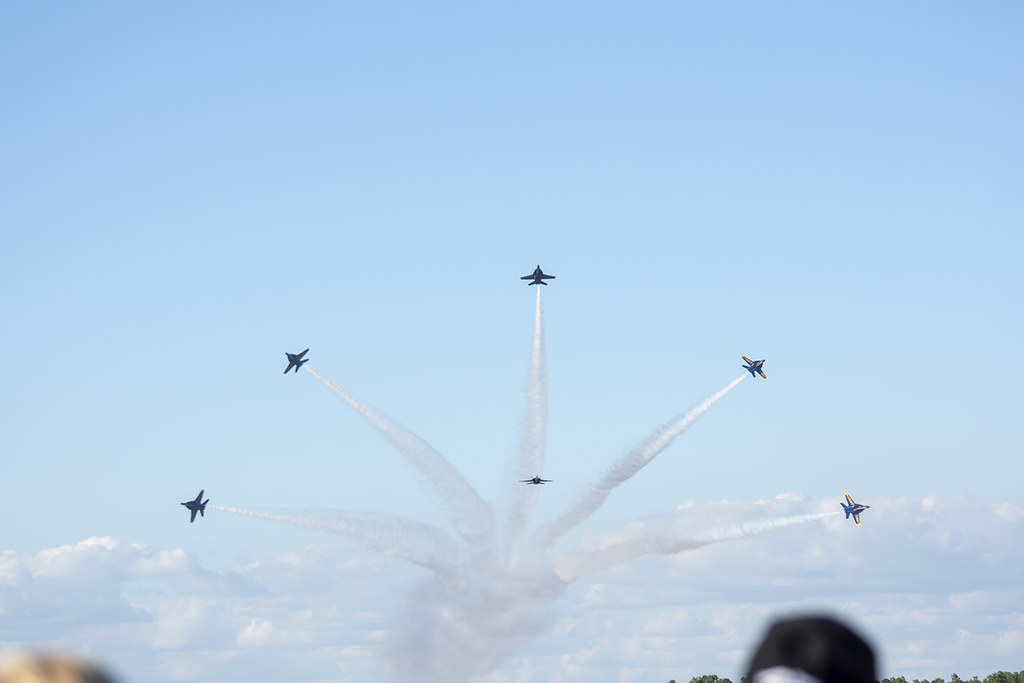 ALWAYS truly enjoy your posts of these. Thank you for taking the time to share.

Way cool Walt! I need to join you some year. Hell, I could have combined it with some Spacecoast excitement!

Well, Skoot, it's not like their schedule is a secret or anything...

You never know when one of their crashes will take out everyone instead of just the pilots. Be prepared.

Location
The Woods of Peardale, CA