Knifemaker said:
Well that’s the problem. Every “how to” on cold smoking cheese I’ve read or watched says you need to wrap it tightly in plastic and refrigerate for at least 2 weeks before eating or it will “taste like an ashtray” (their quote, not yours)
As for what cheese to use, any hard cheese should work, Gouda being my favorite, or pepper jack, and I bet smoked Romano would be awesome.

I got the A-Maze-N when it first came out. I didn't see any videos or how-tos on cold smoking cheese. I'll have to get a slap of mozzarella and give it a try with pellets and "aging" afterward.

Now I have to go cheese shopping. I guess I'll continue to use my Char-Grill smoker.

Well, a nice sunny 65 degree day here, going to smoke a pair of baby backs. Decided to just do two, instead of the usual 6. Going to slather them with sauce for the last 40 minutes. Using apple and hickory wood.

Ribs came out looking great. Added a bit more brown sugar to some Baby Rays to baste them at the end and cranked up the temperature to 255. 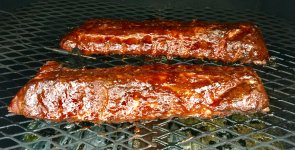 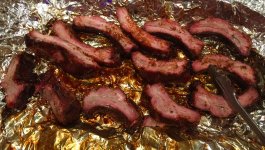 Yep, even a day old they were great.

Our two grandsons are spending their February school vacation with us next week (while their parents are working). The older one has put in a request for some BBQ pork ribs. None to be found in our local market, so I scored two racks of St. Louis cuts at the nearby Wally World. I’ve actually had decent luck with them in the past. It does say “Proudly produced in the USA” on the package. Internet research reveals that all Walmart meat comes from North America, some links say pork comes from Christensen Farms headquartered in Minnesota, none from China.

Today is starting out unseasonably warm (44 degrees right now) and temps dropping through the day. My last few pork rib cooks on the pellet smoker have been underwhelming, so I may drag out the offset smoker into the muddy driveway today to cook them in advance. Next week we are slated be back to normal February, maple sugaring temps. Freezing temps overnight, warming to just above freezing during the days; makes the sap run in the sugarbush.

Diced some of that pork tenderloin and scattered it on top of a Digiornor's Stuff-Crust 3 meat (now 4) pizza and added more cheese on top.

Here’s a look at the Walmart pork ribs after trimming. 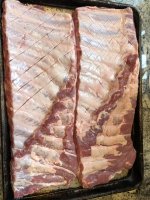 I trimmed the flap on the back that you always get with St Louis cuts, and removed the last bone that had been sawed through with the bandsaw. I also just perforated the silver-skin on the back rather than removing it this time.

Really got lazy and used some McCormick’s pork rub rather than mixing up a batch of Memphis Dust. I wanted to see if that stuff is any good, so no time better than the present. 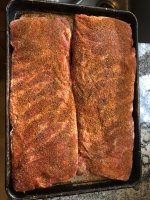 It smells good, and I laid it on pretty heavy with just the meat’s natural juices as a binder.

Dragged out the Brazzos offset, fired it up and with a load of some applewood that I had cut last year from a dead tree on our property. The cook went pretty much to plan, smoking 6 hours unwrapped, but with a few flips and flops along the way. It was hard to maintain temperature because it was very gusty all day, with a cold front coming in soon. They say we are getting another dumping of snow on Friday.

Cooking was tad cooler on average than usual, but I took them off at 6 hours a little “stiff” still, knowing they will have to be reheated fully for eating next week. 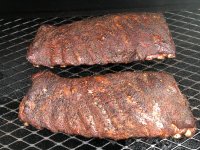 They look and smell great. It will be hard to wait another week to try them. But, the cheese I smoked a couple weeks ago should be ready for sampling next week too. Should be a great pairing

Yep, looks great Fred. There are several (actually a lot) of pork rubs on the market. I usually don’t use them because I always dry brine my ribs first, as they all contain salt, I worry about over salting.

I did a pork loin awhile back, and didn’t brine, just used a store bought rub. (I did let it sit on the pork for 5 hours) results seemed to be similar to brining and using Memphis Dust.
My nose and tastebuds tell me that they all are basically the same, the only difference seems to be in the amount (and type) of pepper used. Some are “chunkier” than others, some more finely ground. Still not sure what’s better there.
I have used mustard, olive oil, mayonnaise, and even butter as “rub glue”, and again, haven’t found a noticeable difference in taste, but did find mayonnaise and butter seemed to diminish the smoke ring. (Likely because of the higher fat content.)
Next cook I plan to try using honey.

Initially, I was going to try something I saw on the “Mad Scientist” channel. He (Jeremy Yoder, not related to the Yoder pits) encourages cooking pork ribs “Texas Style” with just course pepper and kosher salt. But I didn’t know how my grandson would like those. So I actually did a hybrid of salt n’ pepper on the bone side and the McCormicks on the meat side. I also reapplied the dry rub along with a spritz of water part way through the cook.

I thought that siilver skin doesn't break down in cooking. Best to peel it, yes?

You don’t really eat anything off the back side of the ribs anyway. I usually do peel the membrane, but thought I’d give this try. There’s no real right or wrong to it. I’ll let you know what I think when we eat these next week.

I read somewhere that you should remove the membrane from STL ribs, and spare ribs, but not to do it on baby backs as it helps hold them together.

Then there’s the theory that leaving it on helps to hold in rendering fat, making a juicer rib. That’s countered with saying it prevents smoke penetration on the back of the ribs.
Honestly I Ike the crispy thing I scrape off with my front teeth when eating a rib. I know competition guys remove it, but I really haven’t noticed a difference in taste between off or on.
Apparently this is a subject there is much debate on:

I do agree there’s no meat on the back, so seasoning it is not really needed, and removing the silver skin is not really that important unless they are being judged at a competition.
And if you look at the cut pieces of my ribs above, you can see the skin did not prevent obtaining a nice thick smoke ring on the back of the rib.

Use the sliver skin that doesn't break down as floss?

Once a year I make chili for my flying club's chili cook-off and generally enter one more when invited. Yep, those are all 1st place awards lined up by my stovetop. I have several more but some of the goofy trophies are too big. So, I gave them to my friend who owns a BBQ joint to add to his wall of other trophies he has displayed in his place. I use brisket he makes special for me. So, he deserves a lot of the credit too. It costs me just under $100 to make my 8 Quarts of chili. But... Dang, it is tasty! - If I do say so myself. I left out pictures of my top-secret ingredients. But most of what goes in is shown.

The amount of ghost pepper extract you see stuck to that spoon is too much for the whole batch. I have to wipe one side of the spoon clean before stirring it in or the chili is too hot for most. I like mine hot but I have to tone it down a bit for the general public. 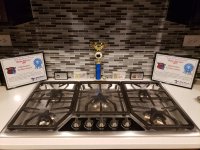 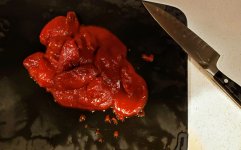 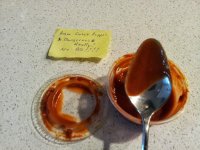 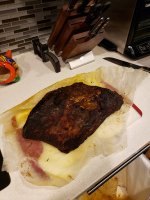 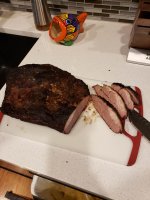 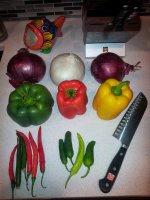 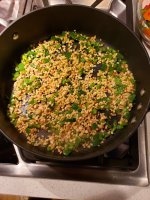 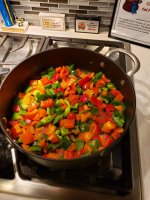 So spill the recipe!

I only have one 1st place award for a chili, but it too used smoked brisket. Something about the texture and smokey taste of the beef just seems to pair well with chili spices and ingredients.
I shared my recipe BTW

Hey Knife, I tried your chili recipe using smoked tri tip rather than brisket and it was outstanding!
It’s a keeper……